In the months after the Berlin Wall emerged in August, 1961, dividing the city, the two leading American TV networks, NBC and CBS, engaged in a race to be first to film young men in the West digging incredibly risky tunnels under the Wall to bring out lovers, family members and friends from the East.   This untold story is at the center of my new book, The Tunnels, just published by Crown.  NBC got their first, in June 1962, but Daniel Schorr at CBS stumbled onto another tunnel project a little later and was poised to scoop his rival–until the Kennedy White House and State Department bullied his boss into canceling his coverage, as I reveal via newly-declassified official documents and interviews.  Schorr remained angry about this for the rest of his life.

NBC’s filming went on, despite official warnings and at great risk, and in September the tunnel it funded brought 29 to freedom in the West in a mind-boggling escape.   I tell this story week-by-week, including the threat posed by a young Stasi secret police informer.  Plus:  the (amusing) filming by MGM of a Hollywood movie drama overhead.  Then, the same scenario (via official documents):  the Kennedy administration tried to get the network to axe its 90-minute prime time special.  Again, the purported reason was that glorifying a mass escape might enrage the Soviets and spark a superpower confrontation.

It looked like the White House succeeded, as NBC postponed the airing.  The film’s producer, Reuven Frank, wrote out his resignation.  But the network quietly put it on the air two months later–and it would end up winning three Emmys, including “Program of the Year,” and to this day remains a landmark in the history of television.  Frank went on to become president of NBC News but the correspondent, Piers Anderton, would later throw his Emmy in the trash.

You can read more about this exciting story in this rave review for the book last week in The New York Times  or in my recent interview with NPR’s Scott Simon.  You can easily order the book from Amazon or from independent booksellers via this page.  But now you can also watch the entire NBC program, below:

Visit NBCNews.com for breaking news, world news, and news about the economy

Just a short post here to announce my new book coming this July, The Beginning or the End:  How Hollywood Learned to Stop Worrying… END_OF_DOCUMENT_TOKEN_TO_BE_REPLACED

New Paperback Edition: Reviews and Praise for The Tunnels

One year ago Crown published The Tunnels:  Escapes Under the Berlin Wall and the Historic Films the JFK White House Tried to Kill in… END_OF_DOCUMENT_TOKEN_TO_BE_REPLACED 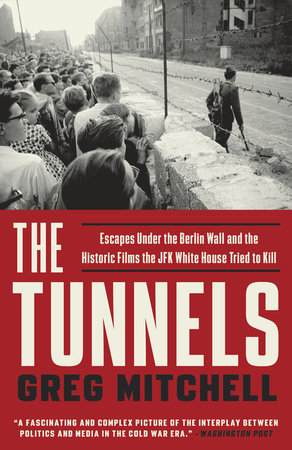